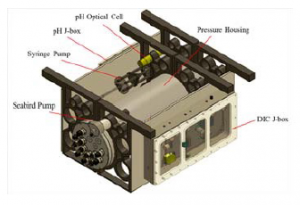 Technology: The Channelized Optical System (CHANOS) uses a modular design that is capable of making simultaneous spectrophotometric measurements of seawater DIC and pH. The compact system contains two chambers, one for DIC measurement and one for the pH measurement, as well as pumps to control the flow into these chambers. A separate housing contains all the controlling electronics, light sources and optical detection systems. The system can obtain near-continuous (12 sec) simultaneous measurements of both pH and DIC. CHANOS is versatile and suitable for deployment on mobile and stationary platforms, such as buoys, profilers, AUVs, and ROVs.