On average, Mars is about 140 million miles from Earth. The deepest parts of our ocean, called the Hadal Zone, are about 6.8 miles below the surface. At first thought, these places may not seem like they have much in common; but both sites face limitations for exploration and present unique technological challenges. Whether investigating ocean trenches or extraterrestrial worlds, navigation systems remain the most significant limitation to exploration, however, decades of research, development, and technological advancements in sensors, computers, and algorithms have enabled humans to reach new heights and depths.

This past month NASA landed the Perseverance rover on Mars to survey the terrain in search of ancient life. The Perseverance Rover was designed to navigate Mars’ terrain safely – capable of sensing the relative location on the surface with the use of Terrain Relative Navigation (TRN), providing a map of a fixed position to target specific landing points. The same TRN system used to identify the landing site, and that will be used by Mars helicopter Ingenuity, is part of WHOI’s autonomous underwater vehicle (AUV) Orpheus. 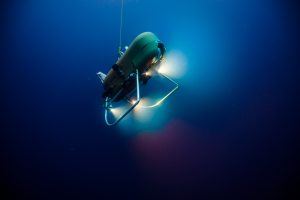 NASA’s Jet Propulsion Laboratory, WHOI engineer Casey Machado, and WHOI deep-sea biologist Timothy Shank have been collaborating since 2017 to develop this new AUV class, capable of reaching the Hadal Zone to study marine life. The vehicle, named after the Greek hero Orpheus who made it to the underworld and back, is a lightweight, cost-effective system explicitly designed for deep-sea exploration. The Hadal Zone pressures and environment closely represent the environments of extraterrestrial waters, presenting a unique opportunity to use similar equipment to study ocean worlds and explore signs of life beyond Earth.

Learn more about Orpheus and the work WHOI is doing with JPL:

This #whale frequently shows up on #WHOI’s @Robots4Whales East Coast detection buoys. Can you ID it?

#WHOI’s talked #ScienceCommunication and what it means to be a scientist at an environmental disaster with the groundwater podcast One Drop Leads to Another.
https://open.spotify.com/episode/1uwSz06C0HtfsacP17H3nm

A few last photos from #UNOC2022. @pdemenocal had a moment after his interactive dialogue to wish Franz Tattenbach of @CRMinae well and to offer #WHOI’s help building on our success here in #Lisbon as #CostaRica and #France begin planning to host #UNOC2025.