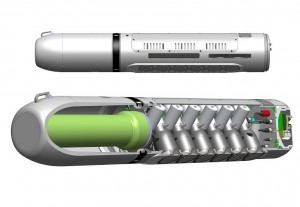 Overview: In the course of conducting underwater surveys with autonomous underwater vehicles (AUVs), there are instances when a target of interest may be detected that requires further investigation by a subsequent AUV. Onsite marking of the target with a transponder ensures that an autonomous vehicle can return to a precise location. However, the transponder must be positioned in a functional orientation to facilitate these surveys. By employing an AUV with the capacity to deploy a transponder to mark a site without additional correction by the user, the survey may be efficiently completed.

Technology: This underwater deployment system holds several transponders entirely by vacuum force which can be individually released to mark a location. Each transponder is configured in weight and dimensions to compensate for any ballast changes which occur in the AUV during deployment, providing a stable system for precise site marking and navigation. Once released, the transponders are able to self-orient themselves on the marked site, ensuring that all transponders are immediately operable.